Your Guide to BUCS Football

Your guide to BUCS football

With the BAFA senior league in recess, and the NFL International series over for the year, where can you go to see some “live” football, well most likely your local university campus should be able to supply you with a fix. With eighty-one programmes competing over three tiers, the BUCS (British Universities Competitive Sports) League is the biggest competition in Europe, and it all kicks off this weekend (mostly on November 4th) and will run into late March 2019.

As it features university teams, it’s probably no surprise that it tends to mirror NCAA college football in the states. The players are registered students and the teams are “run by student committees”. The coaches are generally seasoned Britball veterans, assisted by former students. Most players are with the team for three years whilst they complete their degree studies, but it’s not unknown for them to play for four or even five years. For a lot of the players this will be their first taste of American Football, but some have played junior ball, and there are plenty of Rugby converts who have some transferable skills. There are some intense rivalries as you might expect, particularly in cities where there are two universities. The vast majority of the teams have colourful nicknames, but some of the more traditional “red brick” establishments insist on their programmes being known as “Student American Football” teams. 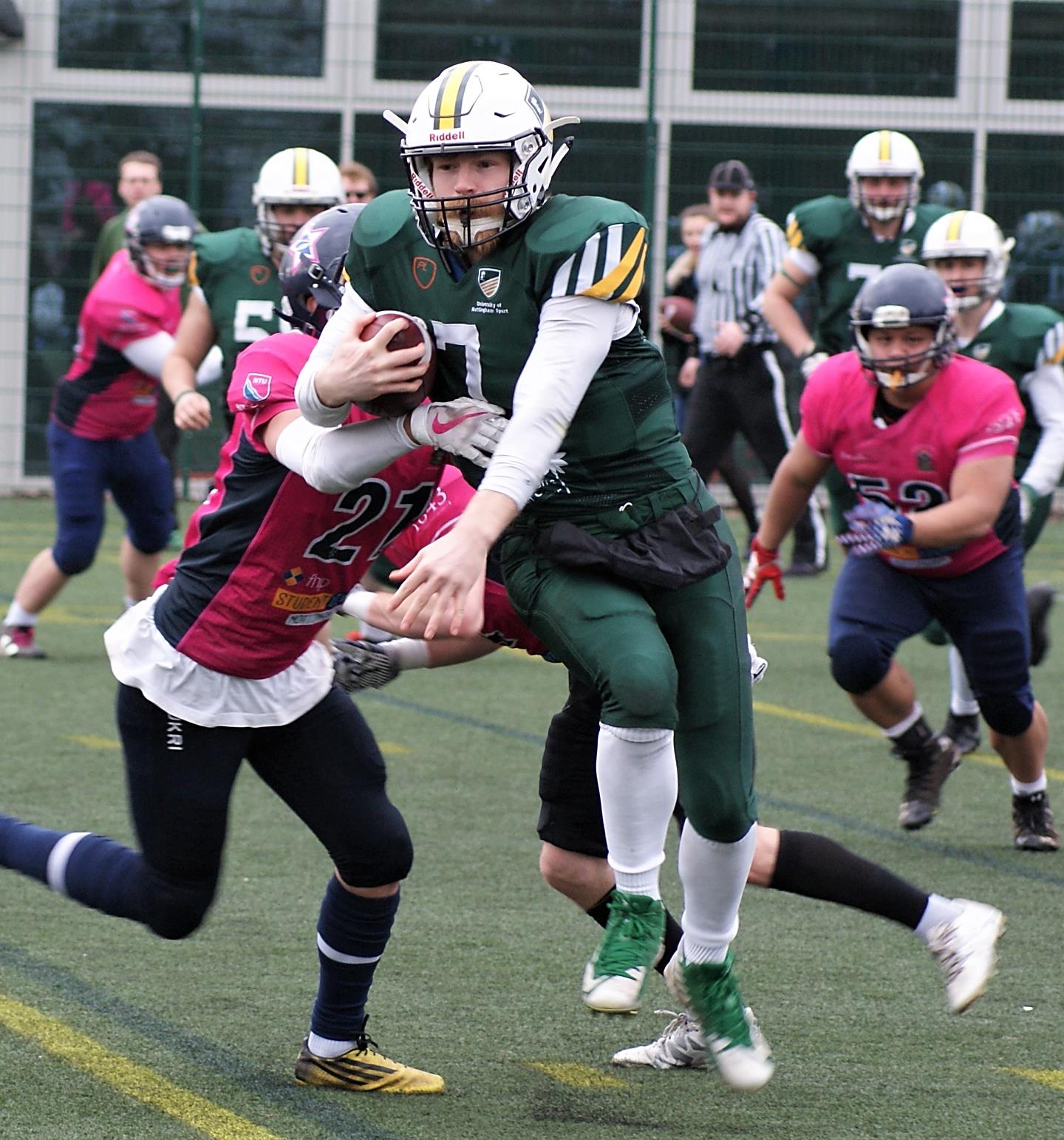 Some of the programmes have strong links with local BAFA senior league teams, and over the years the university system has provided a steady stream of game ready athletes, as players graduate and want to continue balling, they move to the adult league.

The more technically adept teams will populate the “Premier” divisions, one in the north and one in the south, both divisions have five teams who compete for their regional titles and ultimately the National Championship. These teams will usually have American Football scholars on their rosters, who are funded by their generous athletic unions. It’s not unusual to see programmes with eight or more scholars plying their trade. During the summer, some of the scholarship players will play in the BAFA senior league, giving those teams a distinct advantage.

The second tier, known as division 1A features 30 teams split geographically around the country. This tier will see some very competitive teams slugging it out to get promotion to the Premier by winning their regional divisions, and then being successful in navigating the play-offs to become the 1A Northern and Southern champions respectively. In this tier some teams will have the odd American playing, but it is unlikely they will be funded scholars, they are more likely to be attending the university to study and are pleasantly surprised to be able to play Football whilst they are here. At the end of the season there will be a one up, one down situation with the 1A north and south Champions, and the teams who finish bottom in the respective Premier divisions.

The third tier has 41 programmes, and again is divided into regional divisions. They also have a play-offs and promotion to strive for. 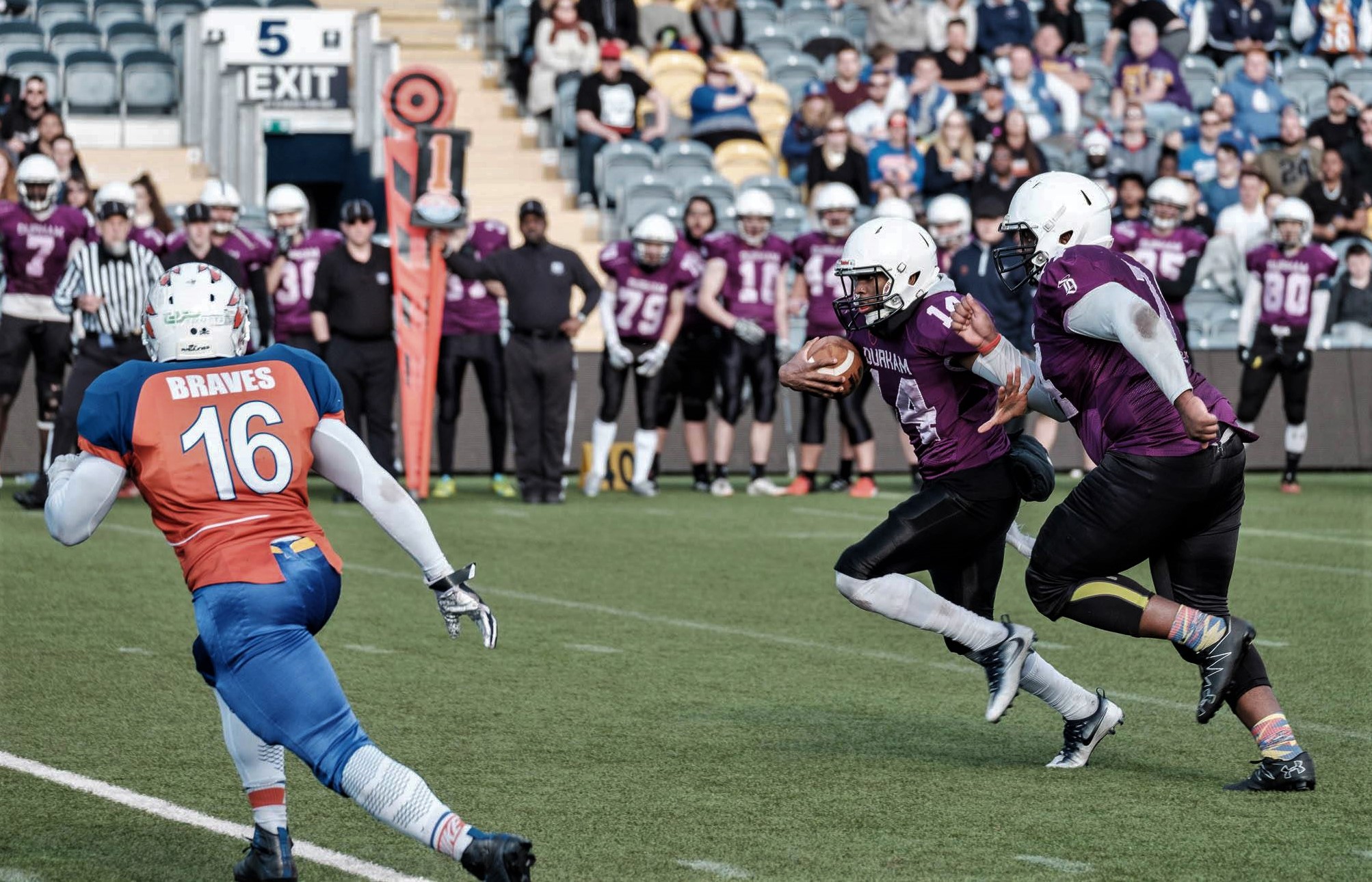 If you want to find your nearest team, then a quick check on the internet or social media should suffice. The current National Champions are the University of Durham, who beat Derby in last years’ final, but if you’re asking me who will win it all this season, then I would say the BUCS final will most likely be won by the team with the most “Bucks”.