What a Finish! - The Football America UK Bucs All- Stars Game

What a Finish! - The Football America UK Bucs All- Stars Game

This game served as a fitting climax to the British University season and also provided a reminder of the great talent that exists within this format of the game. Unlike the BUCS national competition which sees programmes fielding multiple import scholars, the All-Stars game is a strictly Brits only affair, serving as it does as part of the development for the GB Students programme. With Head Coach, Scott Rowe being in attendance, it was also an opportunity for the age-appropriate players to showcase themselves for the Great Britain Under 19 team. For those who were unable to attend, the excellent “On-Side Productions” broadcast the game live, with the popular duo of Walker and Walkinshaw at the helm.

Formerly a staple on the football calendar, it was last played two years ago when it was given a re-birth by FAUK, but like Britball as a whole, it had suffered a two-year hiatus. GB Students Head Coach, Wayne Hill had worked tirelessly over the last few months to ensure the game went ahead and his hard work paid off, as he delivered a showpiece event at the Butts Arena in Coventry. Regional try-outs were held and rosters selected, featuring players from thirty five different programmes. Head coaches were appointed, Paul Sherratt for the North and Maxwell Pettitjean for the South, they, in turn, populated their staffs with coaches from the length and breadth of the country, who served to tutor the different player groups. With limited time to practice as a squad, you might expect to see some miscues, which we did, but they all contributed to the drama! Let’s see how the action unfolded…

The South won the toss and as seems to be the norm now, they deferred their choice until the second half, leaving the North to elect to receive the ball. Loughborough quarterback Bailey Man would have the first opportunity to move the ball, and he did, finding Sheffield Hallam receiver Jason Sanders, for a big first down. Unfortunately for them the drive stalled and they had to punt. However, we witnessed the first of a number of ball security issues as the returner for the South coughed up the ball and the North recovered it at the twenty-three yard line. Despite the strong field position, they couldn’t make any progress and were forced to attempt a field goal on fourth down. Strong pressure up the middle compromised the execution and the kick fell short, turning the ball over to the South on their own twenty. Alex Stocks from Imperial College London started the game at quarterback for the South. Two big completions, a scramble and a horse collar penalty saw the South in the redzone, and behind some excellent blocking, running back Jack Henley of Royal Holloway University went in for the first score of the game. The attempt at a two-point conversion failed, leaving the score at South 6 – North 0. The North had the ball back, but some stifling defence from the South meant they had to punt. With the ball on their own forty, the South looked to establish their running game, it didn’t go well, as for the second time, they fumbled the ball and the North recovered it to end the first quarter. 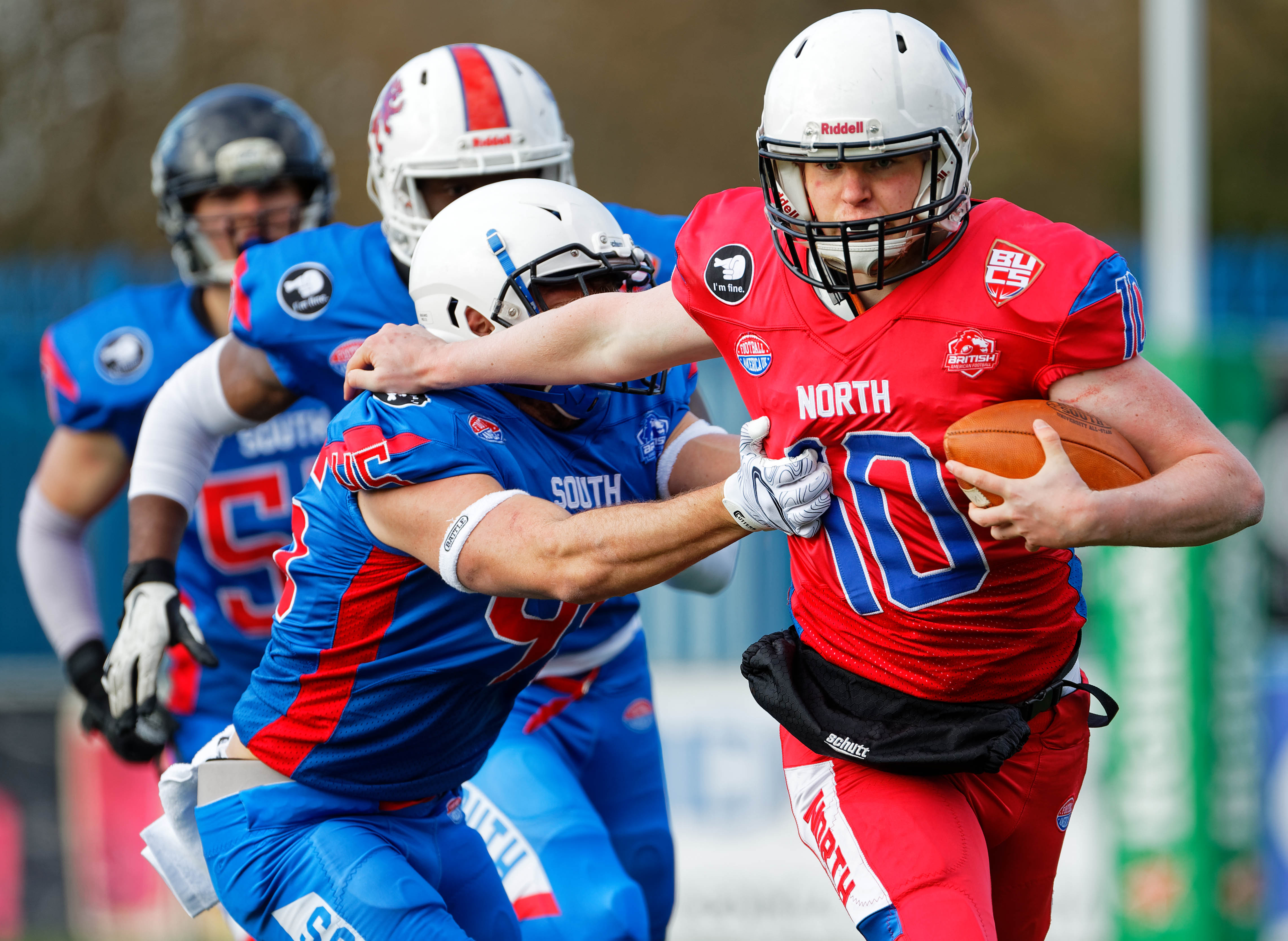 Nottingham Trent University running back, Luke McCorkindale Brown ripped off a first down run, but again, the drive couldn’t be sustained leading to another punt. The South started the drive from their own ten, but in what was becoming a familiar pattern, they fumbled the ball! This time giving the North the ball on the twenty-two yard line. Liam McGovern of Nottingham Trent took over at quarterback for the North. On his first play his pass attempt was tipped, on his second play, an errant snap flew over his head, but was recovered, on play three he connected with receiver Jack Porteous from the University of Sheffield to give the North first and goal. Play four didn’t go so well, it was picked off by Milo Wakefield from the University of Birmingham! And the South had the ball back at their own ten. With half time approaching the teams exchanged punts, but with 1.29 left on the clock two big receptions by Ben Shaw from the University of Exeter had the South in Field Goal range. A run for a first down and a spike set up the kick attempt, which sailed through the posts as time expired in the first half, leaving the score at South 9 – North 0.

At the beginning of the third quarter the South looked to be taking control of the game, they had all the momentum and would receive the ball to start the second half, it felt likely they would be increasing their lead, it was just a case of when. Alfie Birks of Bournemouth University was introduced at quarterback and he started with a big gain on a scramble, he completed two passes and handed off to Henley who bulled his way for another sizeable gain. The North’s defence stiffened though, and the South chose to go for it on fourth down as opposed to punting. They didn’t make the yards and turned it over on downs. Unfortunately for the North, they couldn’t take advantage of the possession, but when they punted, a favourable bounce delivered a sixty-yard kick! Birks had the ball back and showed impressive speed to elude defenders on a QB keeper. The South kept it on the ground with Oluwanifemi Adejumobi of Imperial College bursting through the line for a first down. Birks then targeted Freddie Ash of Exeter University for a nine-yard gain to continue an impressive drive. Solent Universities bruising runner Samuel Adesanya took the ball to the North’s two-yard line and on the next play got to finish the drive with a sweep to the left for a touchdown. Birks found Benjamin Shaw of Exeter University on the two-point conversion attempt, moving the score to 17-0 South. The North needed to get a foothold in the game and when Sanders returned the kick-off for twenty yards it looked promising. Three incomplete passes later though, they had to punt again. The third quarter ended with the South at first and ten on their own three, but firmly in command of the game. 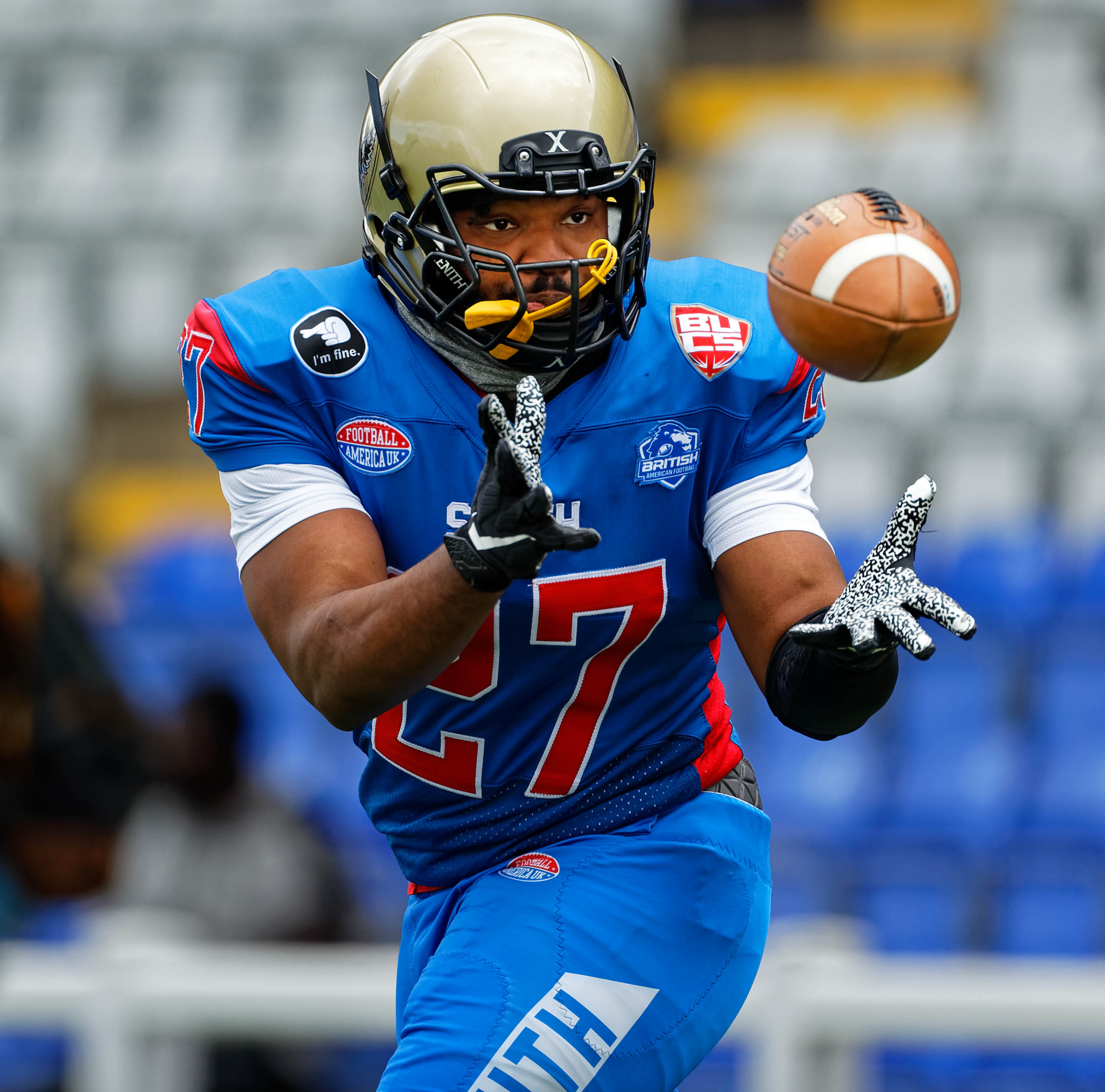 Adesanya proved difficult to stop on the ground

The question heading into the final quarter was, would the North be able to get back into the contest, or would the South just run away with it? If they were to have a chance the North would need to get creative on offence. Loughborough’s Henry Rowland caught consecutive passes to get the chains moving, but a crunching sack by George Rymes of the University of West England put a halt to things and forced the North to punt, or so we thought. The North faked the punt, but unfortunately for them, they got caught in the backfield. The South now had the ball at the North’s thirty-one yard line and when Birks took the snap and dashed through to the six, it was looking ominous, even more so when on the next play he made it to the one. Great pursuit by the North’s defence saw a sweep stopped for no gain, and it was now fourth down. Birks put the ball up towards the back corner of the endzone but the pass was broken up by Nottingham Trent’s Joe Parton. The North were hanging on by the skin of their teeth! Lougborough quarterback Marco Livi was given the chance to create something for the North, but four plays later they were punting again, giving the South the ball back in a strong field position. Birks was looking to connect through the air, but as he went for it on fourth down he was picked off by Burton who weaved his way downfield with the help of some key blocks, before finally being tackled at the South’s ten yard line. The North were knocking on the door but with an incomplete pass followed by a sack it looked like they had lost the chance to open their account, but wait, when the South’s defence were called for “roughing the passer” it gave Livi the ball on the one, and on the next play he took the ball in for the score! The conversion kick was good, and it was now 17-7 to the South.

There were now less than two minutes to go and the South just needed to manage the clock to secure the win. Birks was following the game plan and keeping the ball on the ground, but the North’s defence now had their tails up and forced the South to go for the punt on fourth down. The South lined up to kick, but a sky-high snap eluded the punter who had to scamper back into the endzone. In an effort to recover the ball he picked it up but was hit in the process causing a fumble that was recovered by the quick-thinking Burton for a touchdown! The North went for the two-point conversion but were unsuccessful, it was now 17-13 to the South. There were still fifty-seven seconds left so the North would surely go for the onside kick, they did and it worked! Man came back in at quarterback with instructions to go for it, he did, but his pass down the middle was picked off by Eddie Onamade of Birmingham University to effectively secure the win for the South, who’s offence took to the field and lined up in the victory formation to end the contest.

It had been an exciting end to a great showcase for the university game and augured well for what the GB Students team could achieve when they come together against international opposition. As the players came to the centre of the field to congratulate each other, the well-deserved MVP was announced as Alfie Birks for his dynamic play and impact on the day. 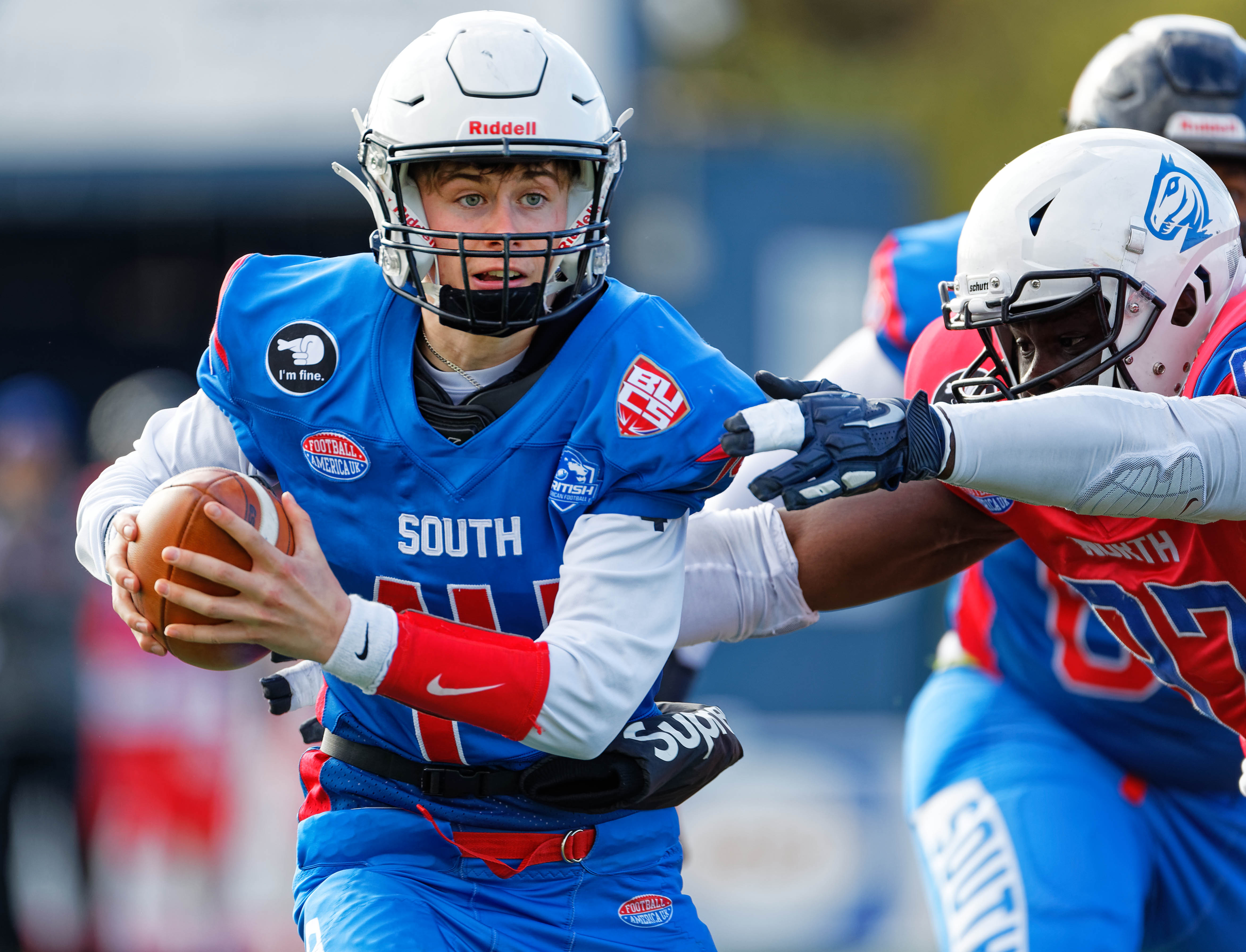