It’s almost time for the top women’s contact teams in the world, to head to Finland, for what will be the fourth iteration of the women’s World Championships and the second time they have been held in the land of “a thousand lakes”. One thing is for sure, there will be a deep pool of Football talent resident in the town of Vantaa, which will play host to all the games at the Myymaki Stadium.

Based on their international records, the competing teams have been seeded as follows:

All the teams will get to play three games as they battle to win the medals and world ranking points. There will be three “Game Days”, July 30th, August 3rd and August 7th, with four games being played each day. In the first round of games the schedule pits the number one seed against the eighth, the two seed against the seventh, the third seed against the sixth and the fourth seed takes on the fifth. The results of those matches will determine who plays who in the second round of games.

The GB Lions will open the tournament with a repeat of the bronze medal game from the 2017 championships when they take on Mexico. They lost that earlier game, but they’ll be out for revenge this time. I spoke to Head Coach Chris Stone and some of the players to gauge their thoughts heading into the competition.

Stone is upbeat about the team’s chances. “There’s a great sense of confidence heading into Finland. Each camp as we moved closer to the tournament, we’ve seen players develop individually, forge relationships as teammates, and overall, continue to raise the level of intensity. As a collective group we know how much hard work and sacrifice has gone into this, and we’re really just excited to finally show the world what we’ve been building towards”.

The Lions will feature a “Thunder and Lightning” backfield with the powerful Antoinette Morgan and the swift footed Ruth Matta. Fresh from winning another National Title with the Boston Renegades in the States, Matta is enthusiastic about re-joining her GB team mates. “I’m really excited for the upcoming worlds. During previous tournaments we’ve always just fallen short and haven’t really fulfilled our potential and that’s been really frustrating. There’s been a lot of change since our last outing so with all this, we’re expecting this to be our time to show just how great Team GB can be.” 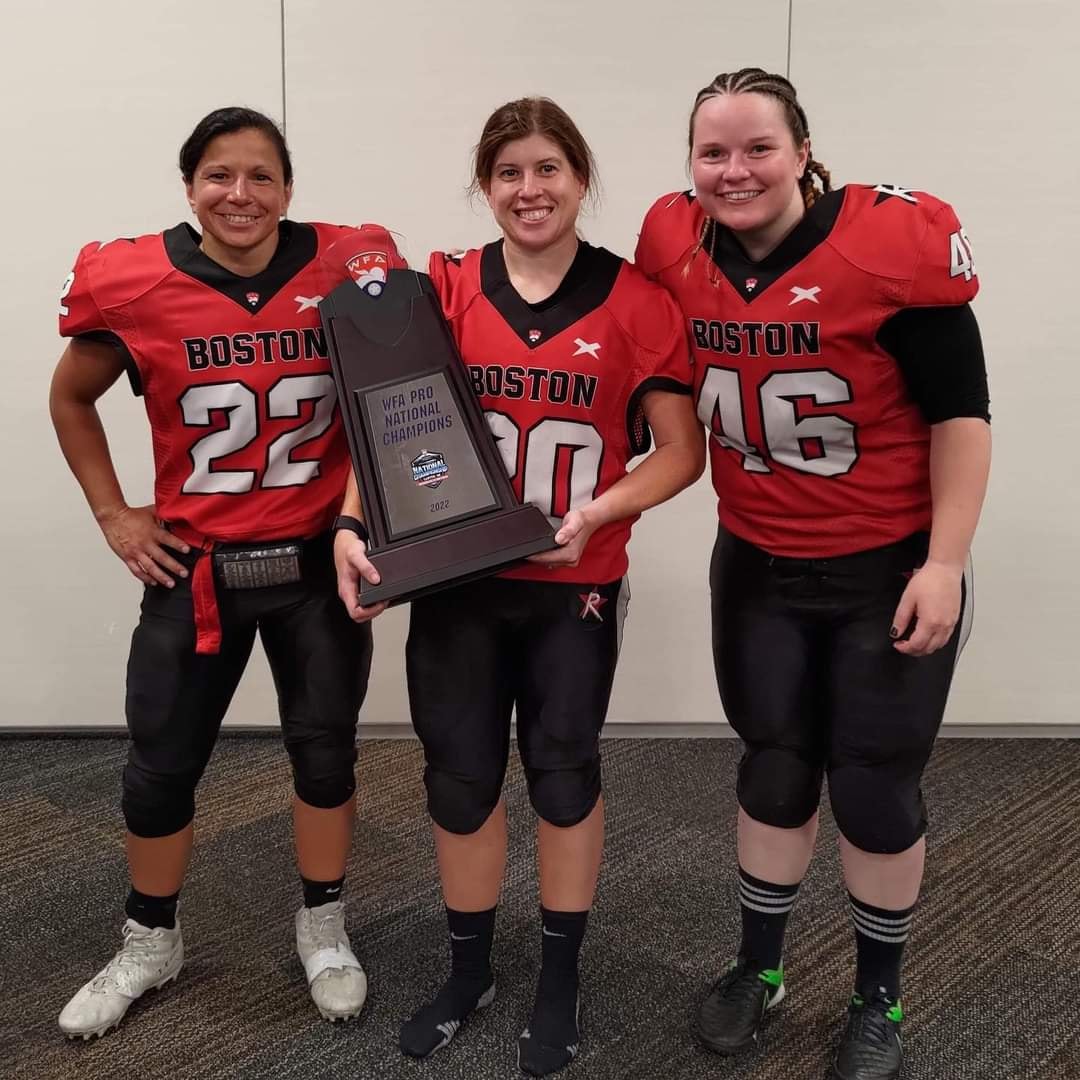 Matta and Tytti Kuusinen of Finland have been team-mates for the Boston Renegades, now they will renew their International Rivalry

Morgan is also relishing the opportunity to introduce herself to the opposing linebackers! “It’s always an honour to be selected for GB and play alongside so many amazing athletes. I have been lucky to have been involved in the programme since the first 11’s friendly against Sweden in 2014. Since this time, the ability of the squad has grown exponentially, and I’m excited to see what we can bring to the World stage. For this campaign, we have seen an influx of newer, talented players and coaches who have helped to further develop and shape the level of Football IQ within the squad. We push and challenge each other to bring our best, each and every practice, and I can’t wait to see how our hard work translates to the field in Finland”. 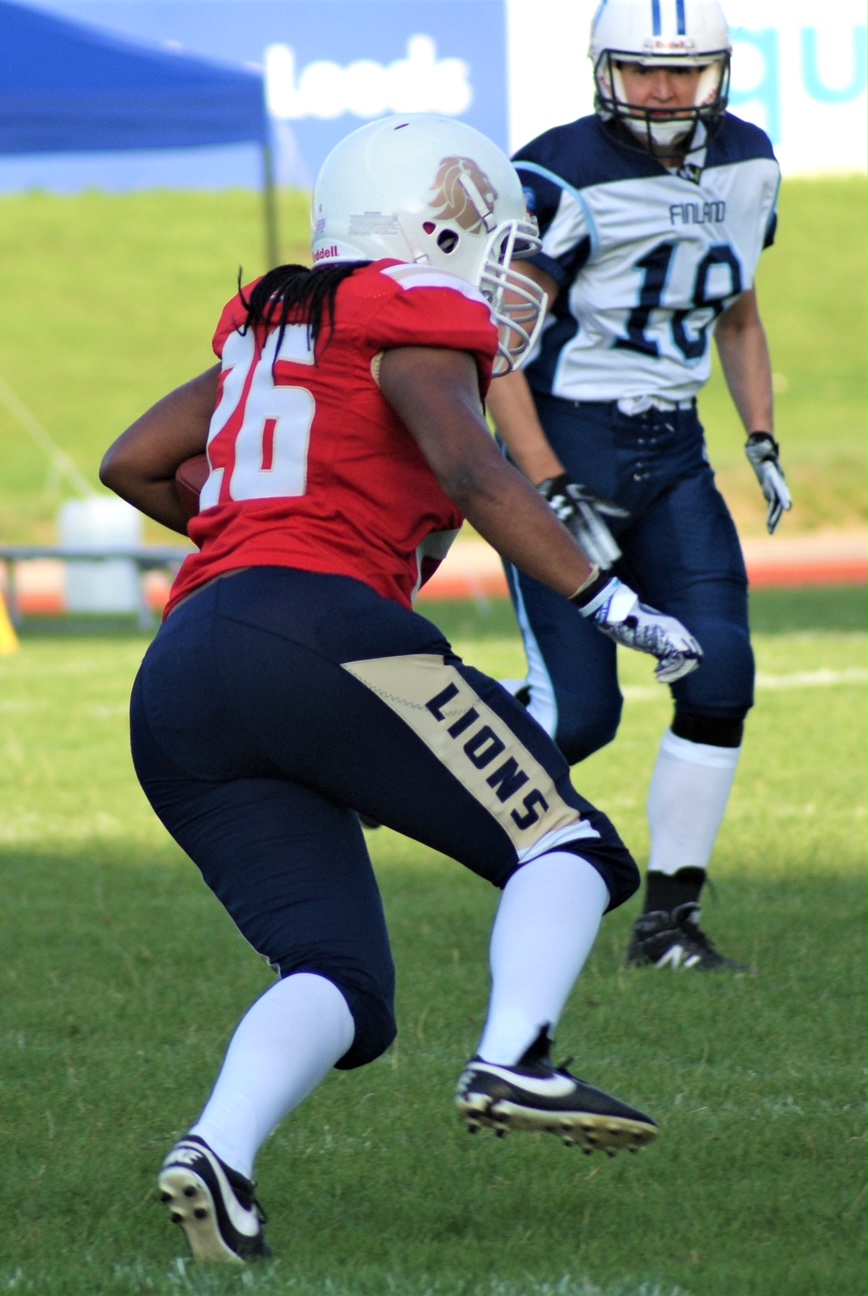 Antoinette Morgan – An intimidating sight in the Backfield

One of those new players who’s determined to make an impact is defensive back Josie Symonds. “I’m a rookie to the national programme, and relatively new to the sport itself, so being able to learn from so many GB vets in camp, who have huge amounts of experience and knowledge, is awesome. The group is coming along brilliantly - every session we see improvements, with our playbook coming together more and more. We train at the level we want to compete - with huge intent and ferocity. The competition between Offence and Defence challenges the whole squad in every play, and so far, it’s felt like great preparation for some tough opponents in Finland. We can’t wait to take to the field vs Mexico in round one. It’s everything to play for out there, and this GB programme, both players and coaches, has a point to prove”.

Symonds has been all-in during Team Practices

Host team Finland are in the middle of their National season, so there will be a break in play to accommodate the tournament. Their Head Coach Mika Eloranta is taking a pragmatic and positive view as his team prepares. ““We announced our 60-player roster last week on Friday and from this group the final team will be assembled. We have last training camp next week, Monday-Thursday and the final 45 player roster will be selected then. We have already announced 15 players which are in the team, so we are processing step by step. Some injuries unfortunately along the journey, but that is part of the business. In Finland we still have one round of football left before the tournament break, so hopefully all selected players will stay in shape. But all in all, team Finland will be ready for the tournament with a great team. Of course, our aspirations are to win all the games we are playing, but if Finland is in the medal games, then our goals has been fulfilled. Just hope that we can have a fantastic tournament, and everybody will enjoy the games and be part of the big football family”.

There’s no escaping the fact that the two North American teams are the favourites to be playing in the Gold Medal Match. They bring a host of experience that will be hard to overcome. None more so than the Canadians, who impressively will feature a player who will be taking part in their fourth World Championship. Despite being a veteran competitor, Defensive Back Trina Graves is still full of youthful enthusiasm. “Being the 4th time at Worlds, it still feels a little surreal to have the opportunity to compete again, but the push continues to prepare mentally and physically for July, so to be able to represent the Red & White, and the amazing women I play beside the best I can. I cannot wait to get into the thick of the week before with practices, planning, adjusting and essentially building Team Canada.” 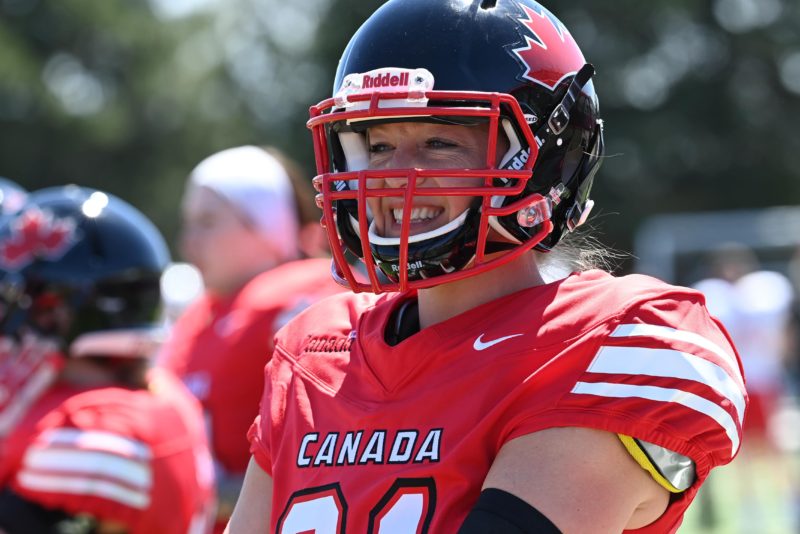 The USA team have never been between at a World Championship and have four lots of gold medals deposited in the volts already. With the Cleveland Browns Callie Brownson as Head Coach, the expectation is that they will secure a fifth, but they are taking nothing for granted, Offensive Line stand-out Hilary Crook epitomes the work ethic of the team. “I’m really excited to represent the United States in the upcoming games. With camp coming up in a few days, I’m looking forward to putting in the work with my teammates. We will need to be our best to be able to compete against other countries at the highest level”. Receiver Angela Baker reflected on the opportunity she has to be back on the world stage. “It is an honour to have been selected to represent my country for the second time. Playing in the 2017 WWC games was one of the proudest, most memorable experiences of my life. I’m looking forward to playing along-side some former teammates and adding some new ones to this year’s team. It is exciting to see the continued evolution of women's tackle football and how each country is developing through the years. The talent that will be showcased in these games is continually growing and I believe this year will be the best WWC yet”.

Defensive Back Shantel Wilson is certainly looking forward to the adventure. “I am really excited about this new journey and experience I am about to embark! Just looking forward to building new relationships and friendships with my teammates. This is another great opportunity to learn the game of football from different coaches, compete at one of the highest levels and continue to showcase women's tackle football. For months we have been mentally and physically preparing now just have the chance to bring it all together! Looking forward to playing against ladies from another country and experiencing Finland and all it has to offer. Just really excited, grateful and happy for this opportunity”.

Of all the teams competing in Finland, the Australians will have put in the most miles to get there. As the seventh seeds, their opening game will be a tough one against Canada. I spoke with quarterback Heather Marini, who is currently coaching at Brown University in the States and is also part of the Championship winning Boston Renegades roster. “I’m very excited to match up against Canada in Game 1, obviously they are historically a very good team, and it will be a great test for us. This year’s World Championships feels a long time coming! With the pandemic putting so many competitions on hold it was a lot of training in the background, on your own, and hoping things would come together. I’m so grateful to have the opportunity to play with a terrific and talented group of women who have all trained so hard and sacrificed so much so we can do what we love at the highest level. Our coaches have been working equally hard, despite Covid and distance restrictions to try and create a cohesive team, even before we step foot in training camp next week. I’m excited about what’s in store schematically, with any all-star team it’s about playing to your strengths, and I know Coach Wilson and the staff will do their best to get the best out of us. I know Finland will put on a great show and I’m anxious to get started!” 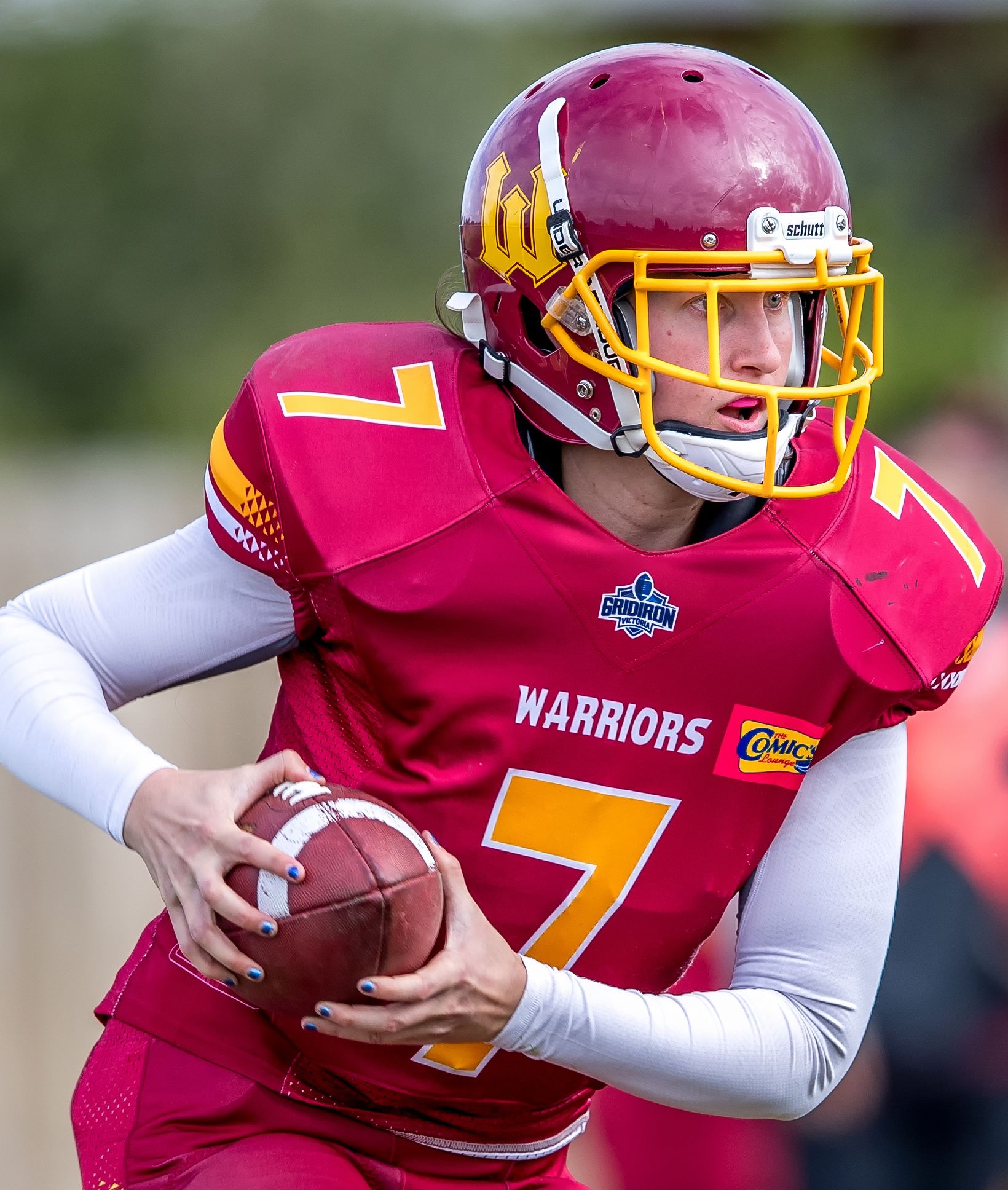 Marini will be at the helm of the Australian Offence

Whilst the players board their flights, collect their accreditations and get themselves in the “zone”, fans around the world will be picking up their favourite beverages and snacks, checking the game schedule and parking themselves in front of their TV screens ready to enjoy the spectacle! I’m informed that all the games will be live-streamed (check social media or ask your old friend google to find the links). In a summer of high-profile global sports events, if you like high octane, big impact action the IFAF 2022 Women’s World Championships is the one you do not want to miss!