On April 10th, almost two years on from Britbowl XXXIII the BAFA Premier Division clubs will be back in action to see who will match up in the 2022 Championship game. The regional schedules of 2021 gave teams the opportunity to play some Football, but it didn’t run smoothly. Overmatched teams, late withdrawals and controlled scrimmages became the norm. On the upside, it did give teams the chance to give plenty of reps to their rotational and rookie players though.

I spoke to some of the players and coaches involved to get a take on what they are hoping for from the “big return”.

In the Prem North the Manchester Titans are looking to take the step from making the play-offs, to contesting the final. Head Coach Jon Homer gave me his thoughts. “We're excited about the new season, after 2021 where we we're strong on the field we are keen to get back to the normal Prem season and to push for the divisional title and a successful play-offs. While 2021 posed a lot of challenges, the schedule allowed us to get game time for younger players who are recent U19 grads and for guys who may have been on the cusp of our A/B teams. We got to see a lot of players in action and learn about them physically and mentally. In terms of our journey as a team, our culture and vision is well established and we look to build on that again, we have been able to bring in some exceptional coaches to boost out ranks and we have had a fantastic recruitment to build on the strength we already had within our Squad. Already in January we are seeing levels of play that I would expect to see after 10-12 weeks of training, not 1 week, our squad is bought in to how we want our season to run, in terms of practice and classroom, the attendance that demands and the work that is needed away from football on fitness and nutrition”.

A new signing for the Titans is stand-out linebacker Mark “Rio” Houghton and he’s certainly looking forward to re-acquainting himself with the divisions running backs. “I’m beyond excited to get back to normal in regards to the football schedule this year. As good it as felt to get back into pads last year after a long lay-off due to the pandemic, it just didn’t feel as enjoyable for me personally. Being limited to regional fixtures as opposed to the regular structure, along with no playoffs or a title to aim and compete for, it was a big miss, and I can’t wait to get back to work and chase those goals with the rest of the team”.

Across the Pennines in Sheffield the Giants will no doubt be applying some Yorkshire grit to the task in hand. Coach Toby Chesters knows it won’t be easy but is relishing the challenge. ““We are really looking forward to the 2022 season and renewing some old friendships. 2021 was very stop-start for us which meant it was difficult to gain any real momentum and consistency. As always we are going to compete 110% and we will be looking to challenge for a playoff position at the end of the regular season.” 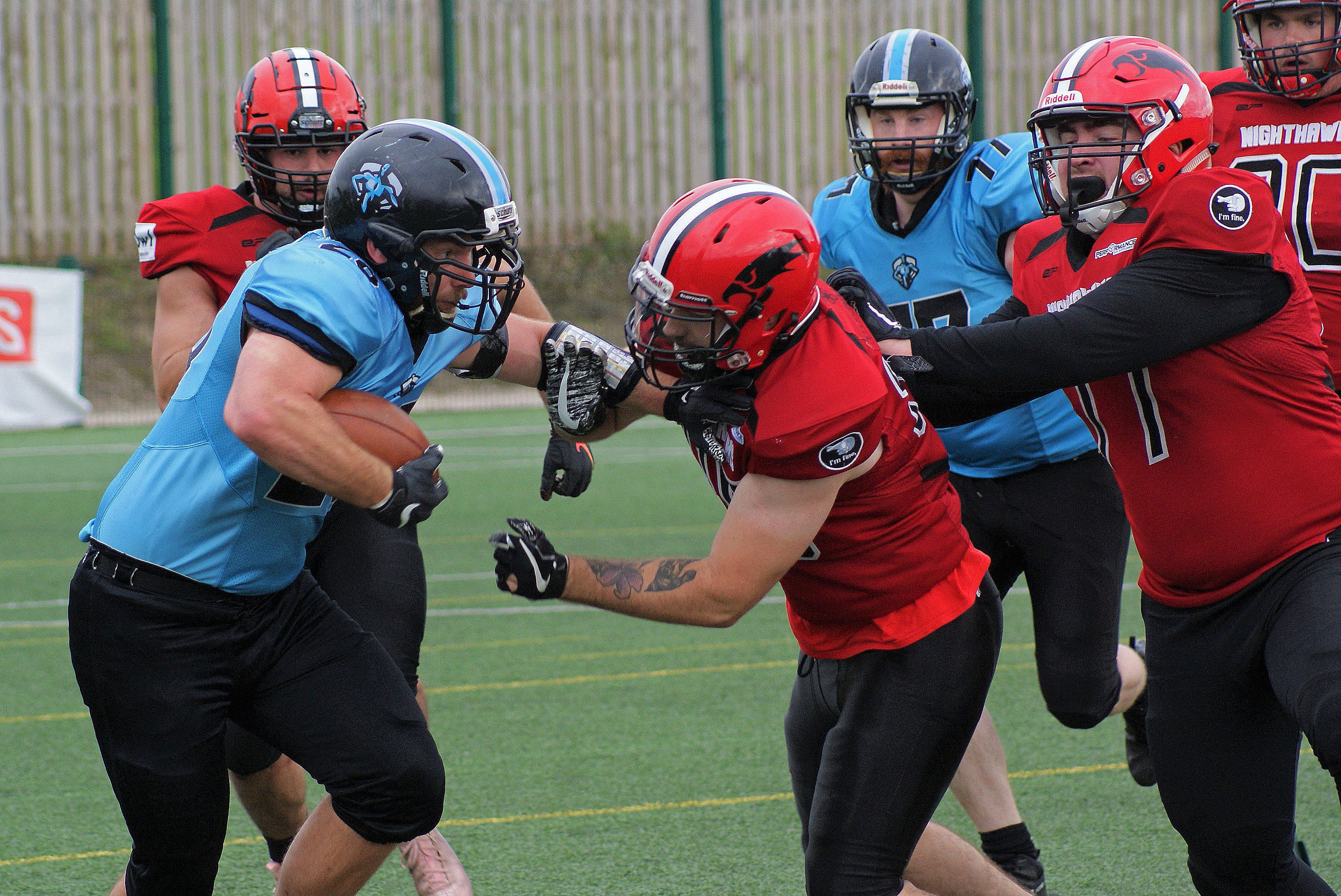 To get a players’ perspective on the Prem North, I spoke with Edinburgh Wolves quarterback Jamie Morrison. “It's an exciting year of football ahead. Although there is going to be a lot of travel involved over the upcoming season, it's going to be great to be playing at the Premiership level once again. Working together as a team to overcome the preparation and challenges for 10 very tough games, to play at the highest level this country can provide. It's the standard we desire to play at. Due to the multiple changes each team has likely gone through during these turbulent times, including ourselves, since we last met on the field, we are super focused on ensuring we are as fundamentally sound as we possibly can be. It's exciting times with a new coaching staff and return to a higher level of football. The attitude and energy around the team at practice is extremely positive from new and old faces”.

Tamworth will be determined to retain their Northern Champions title. They always arrive well prepared and stacked with talent. I spoke with Phoenix and GB running back Elliot Walters to get his thoughts on the season ahead. “It feels like all of the two and a half years and more, since we last played prem football! Last year helped scratch the itch a bit, but really, we're excited to get back to playing meaningful football this season for the first time in far too long. Naturally the goal for the season is always aiming for a national title - anything else is coming up short. After such a long time away, and as I imagine with most teams, there have been a number of changes and some notable losses from the team that were playing in Britbowl in 2019, but I'm really excited with the squad and coaching staff we have. All in all, I'm just looking forward to being back out on that field finally playing proper football again!

The Prem South teams are raring to get back on the field too. After their promotion at the end of the 2019 season, it’s been a long wait for the Solent Thrashers to play some Premier Division Football, but they are about to get their chance. Head Coach Steve Rains is realistic about the upcoming campaign. “After Covid stopped 2020 and 2021 we are looking forward to finally playing our first Premier Division season. We know that it’s a very tough Division and that 2022 will be a big test for us. It’s unfortunate that we were not able to carry the momentum of our 2nd tier National Championship into a promotion year, but we have worked hard at improving both on and off the field and we are excited about taking on the challenge”. 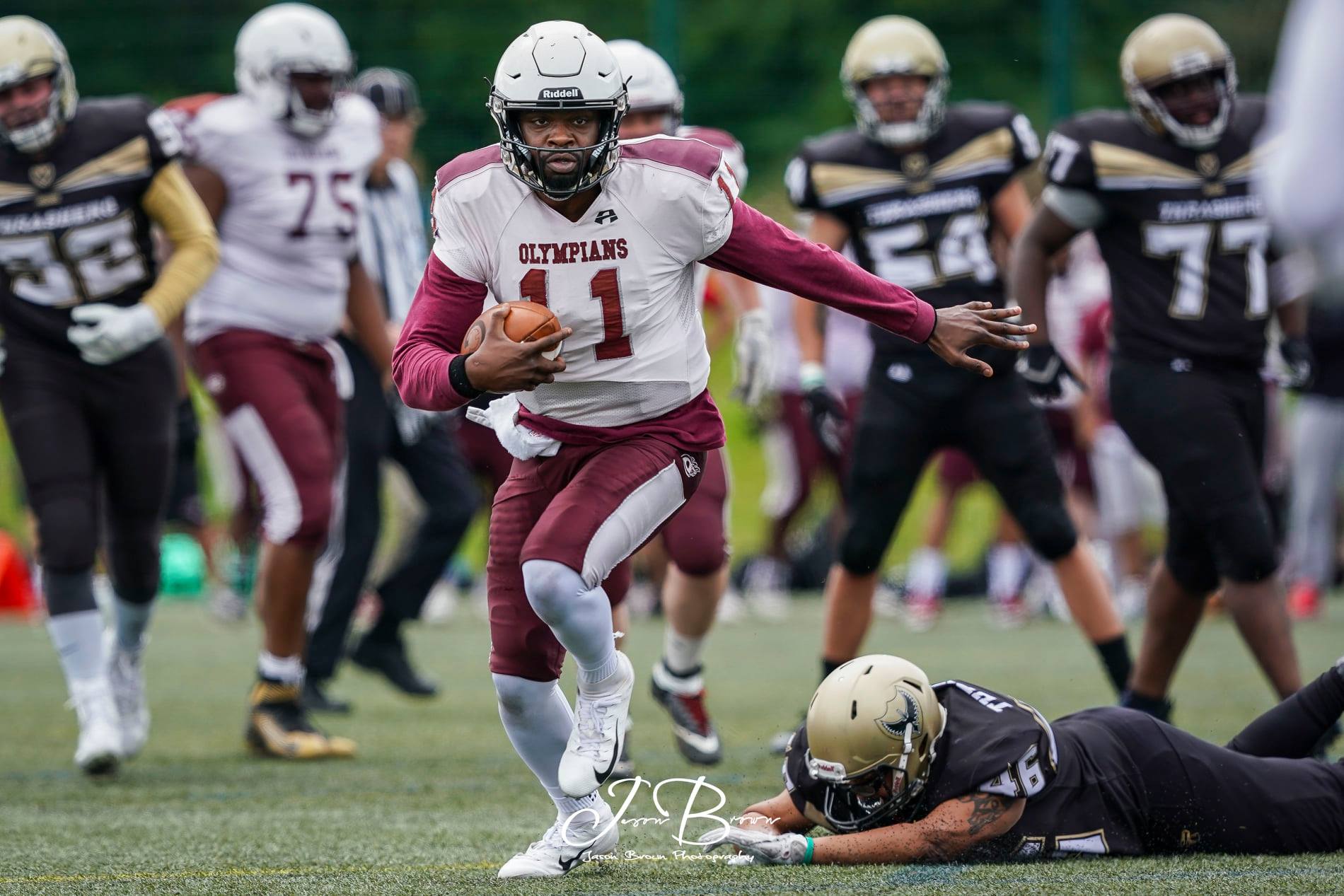 Can the Thrashers and Olympians make an impact in the South

The battle for London bragging rights will continue with the Blitz looking to re-assert themselves as the capital’s number one team. Quarterback Chris Walker is looking forward to the opportunity. “Happy to be back playing a full schedule of games, it’s great for guys on the team who need to get as much film as possible to play in America/Europe, but also gives all players on the depth chart an opportunity to get playing time to develop. I’m just looking to get better each day and to be the best team-mate I can be. I try to set an example on and off the field. It will be nice to see people back in the stands at Finsbury Park”.

Another programme intent on making an impact are the Kent Exiles. I spoke with their media team. “The Exiles will compete in the 2022 Premiership season with heavy hearts following the tragic and sudden passing of defensive coordinator Neil ‘Neo’ Edwards in mid-January. The Britball legend and Hall of Famer leaves us at the desperately young age of 48, having just begun to mould the defense, and team, as a whole, in his indomitable and unique image. The job of dragging the team back up from such a devastating loss falls to new Head Coach Malcolm Phillips who took over the reins after long-time HC John Moore stepped down in November 2021. The Britball veteran has an experienced team of coaches to support him and the Exiles will continue to benefit from a solid organisational structure along with their perennially successful Youth and Junior programs. The cornerstone of the Exiles 2021 season was a swarming, aggressive defense led by a group of very active Linebackers. The D kept them close in games against all but the Warriors and hopes are high that will continue into this season. The Exiles will be hoping that their 2022 offense is more the one that showed up in the 34-0 shutout victory over the Olympians to finish the year, than the one that struggled to point up points early in the campaign. Offensively the Exiles have a talented group of skill position players to call upon and will hope to get off to a faster start than in 2021.”

Over in the South-West the well-established and respected Bristol set-up has the Aztecs competing. I checked in with long-term player and newly appointed Head Coach Pete Jones to see how the off season had gone. “We’re hugely looking forward to the new season, having added some exciting young players and coaches to the roster. After last season’s regional competitions, we’re looking forward to locking horns with our regular rivals in the Prem South again”.

At this time of the year, back in training and full of optimism, clearly all the teams feel they have a chance of play-off action, but there are a number of factors to consider when evaluating who might be successful. The North is probably the more open division. It will be interesting to see if Tamworth have retained all their elite players, or if some have chosen to play in the European leagues. Manchester have recruited heavily for the last two years, so the questions are, who will be dressing in the royal blue this season and will they have enough to take the divisional title. There’s always the chance of course that a “dark horse” could break through from the other teams in the division. Sheffield and Merseyside are capable of an upset on their day, but for Edinburgh or Sandwell to reach the post season would be a major achievement.

In the South the Warriors could be facing the same problem as Tamworth with regard to players moving to test themselves in Europe, but they always seem to have great depth on their roster. You can never discount the Blitz and they will start the season as a likely play-off side. The Exiles will be well coached and looked strong in last seasons “regional” games. Whilst the Thrashers, Aztecs and Olympians will be battling to overturn the existing pecking order on the way to some post-season play.

When the dust has settled, I expect to see the Phoenix and the Warriors facing off again at BritBowl XXXIV come August, who have you got? 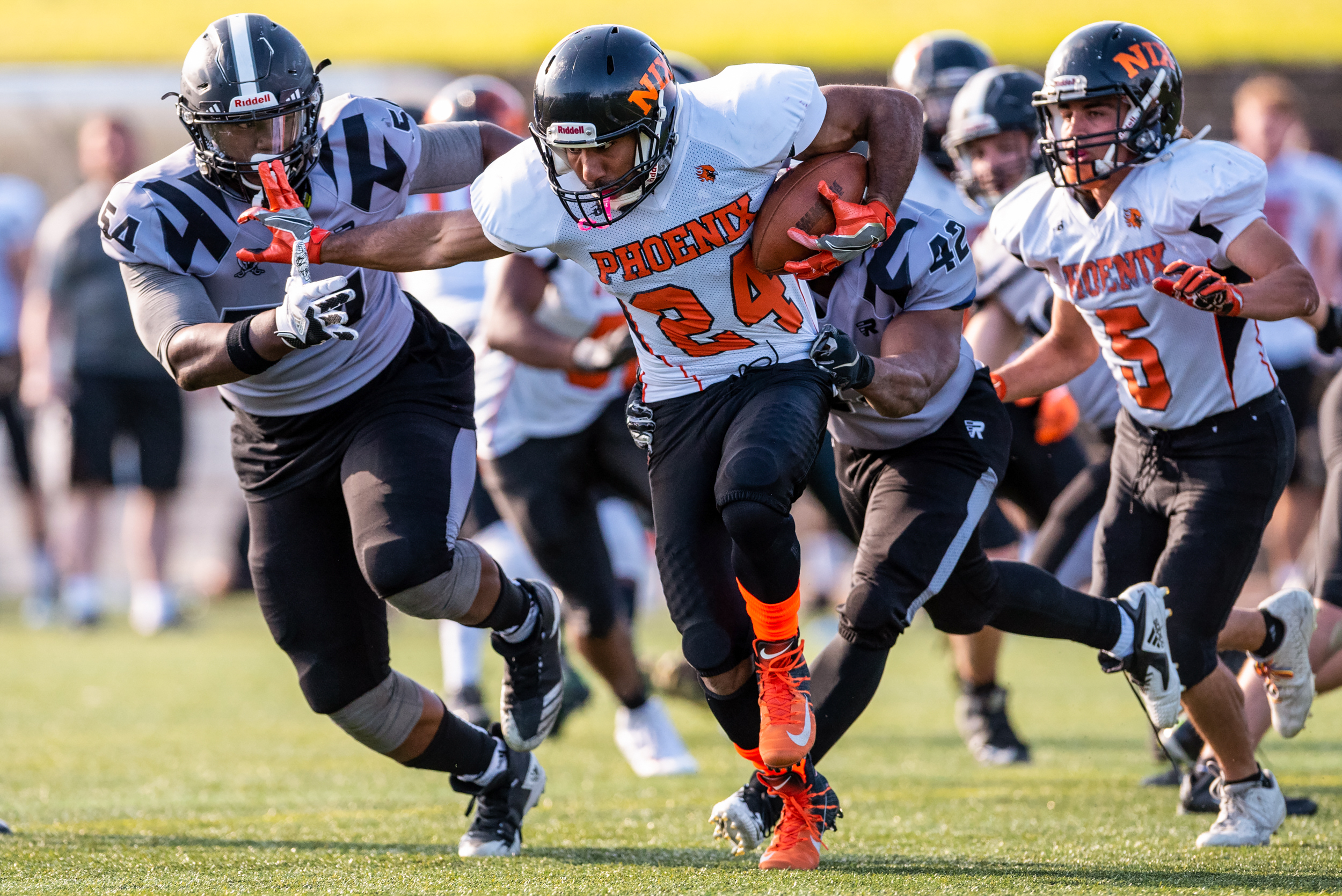