The competition features four teams, GB, Finland, Sweden and Austria playing a round-robin tournament over three game days. Gameday one is Monday August 12th when GB play Sweden, followed by Wednesday 14th when they match up against Austria, and Saturday 17th when they take on old rivals Finland. There will be two games on each day and the European Champions will be the team with the best overall record. The John Charles Stadium in Leeds is where all the action will happen, a venue well known to Britball fans.

When the British players take to the field on August 12th it will be two years since the GB Women’s team played a competitive game. That encounter was with Mexico in the IFAF Women’s World Championships in Canada. It ended in a loss but, the team had secured themselves a fourth-place finish, and the title of “The Top Team in Europe” after defeating Finland in an exciting earlier contest. Two years on then, where does the team stand? Well they are going into this tournament as the favourites and they will be on home turf, but their opposition will be arriving in Leeds full of confidence, thinking they can leave town with the silverware. Two years is a long time in Football and the GB roster has seen some personnel changes. Most notable of these has been the retirement from international football of quarterback Jo Kilby, who has stepped away to focus her energy on the on-going development of the National Champion Birmingham Lions programme. Receiver Hannah Pye has decided to take a break from football (hopefully temporarily) and two way phenom Gaby Knops is unavailable.

The squad for the Euro’s is a combination of veterans and exciting rookie talent. The forty-five players are drawn from thirteen different teams from all corners of the country and features some well-known names in the world of Britball.

Head Coach Jim Messenger has been focused on the task in hand of getting the team ready to perform. “Preparation has gone well this year. We have had a fairly long run at this event, so we started planning last year. We carried a practice squad of 75 players through the monthly practices up to June and our final practice will be with just the 45 player Competition Squad. The longer time together has allowed us to get more experience at playing 11 a-side football, which is necessary because, unlike the other nations, our domestic women’s teams currently compete at 7v7 level. Being the host team this time is a mixed blessing. We have the advantage of knowing the facilities and the local environment very well, It will definitely have that 'playing at home' feel which can help the players relax in the camp environment much better and of course, we hope to have good support from a home crowd. On the opposite side of that is the potential pressure of expectations on the team. We enter the tournament as 1st seed. We can't play the 'new-comers' card anymore with the success we have had, and with the home advantage, the pressure will be on us to perform very well. We are very well aware that we are BAFA's hope to win some international level silverware. But the competition will be tough. With only four teams in the competition, all of whom are very experienced and have seen a great improvement in their domestic level women's game over the last couple of years, this is far from a foregone conclusion. Anyone of the four could win this competition”.

I spoke with some of the players to get their thoughts ahead of the tournament.

First up is talismanic linebacker Phoebe Schecter. “We are really excited at the challenge of the European Championships. Being the host country is a huge opportunity for us to put women’s American Football on the map in the U.K. Our team has a healthy mix of new and veteran players and I can’t wait to see how we all come together for this brilliant event”. 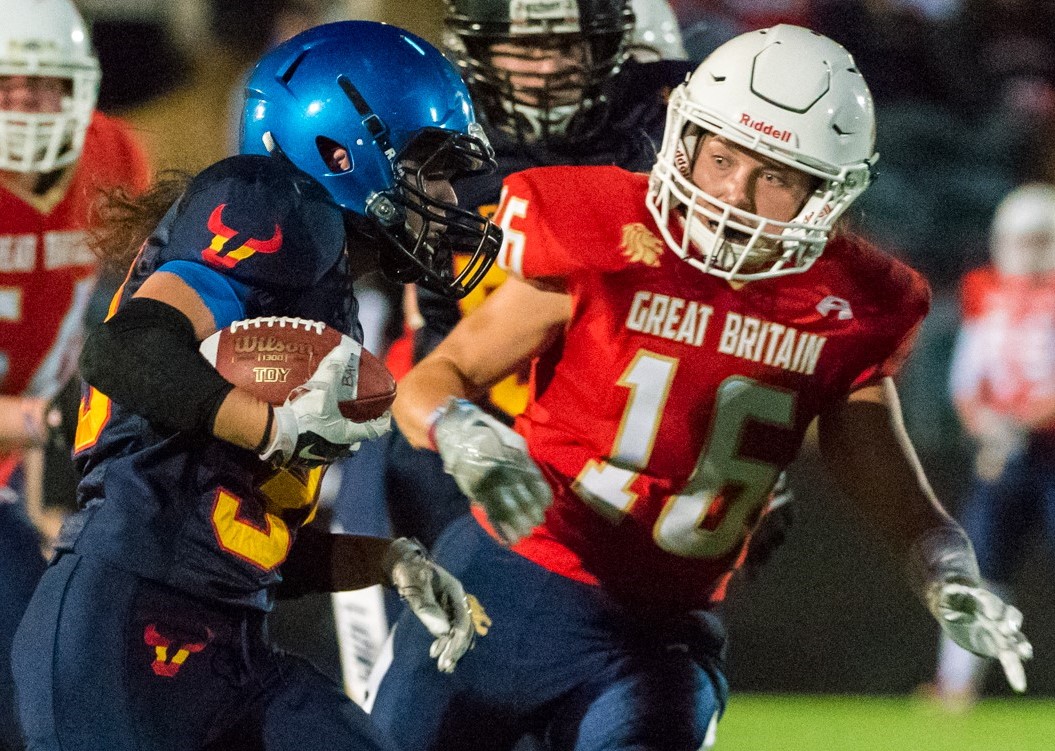 Lining up alongside Phoebe will be Affy Law, her experience of playing in Europe will be invaluable. “I'm excited to be entering our second euros as team GB! There will be some tough competition throughout the tournament, but we have come so far as a squad over the last few years that I'm looking forward to seeing what we can achieve in this European Championships! Can't wait to pull that jersey back on alongside my team mates to fight for that gold medal!”.

Another player with plenty of experience outside of the British League is receiver and kick returner Oli Davies, who will be back in the UK having spent the last few months playing for the Kansas City Titans in the USA.

“Just really happy and excited to have been selected for another GB squad. The competition for places on the team has gone up another level this year, and it’s incredible to see the growth in the game since our first tournament four years ago. I feel so lucky to still be involved with this amazing team, and to get the chance to go for gold in front of home support against the best in Europe. I know that Sweden have really stepped up as well since the last time we faced them, so that will be a tricky opener. Austria are a bit of an unknown quantity, so it will definitely be interesting to play them for the first time. Then we know that Finland will be out to avenge the defeat we inflicted on them at the world championships in 2017, and they’ll come at us with all guns blazing, so that will be a huge test. I’m just really looking forward to three tough competitive matches and performing to the best of my ability to help the team and see all of our hard work pay off. 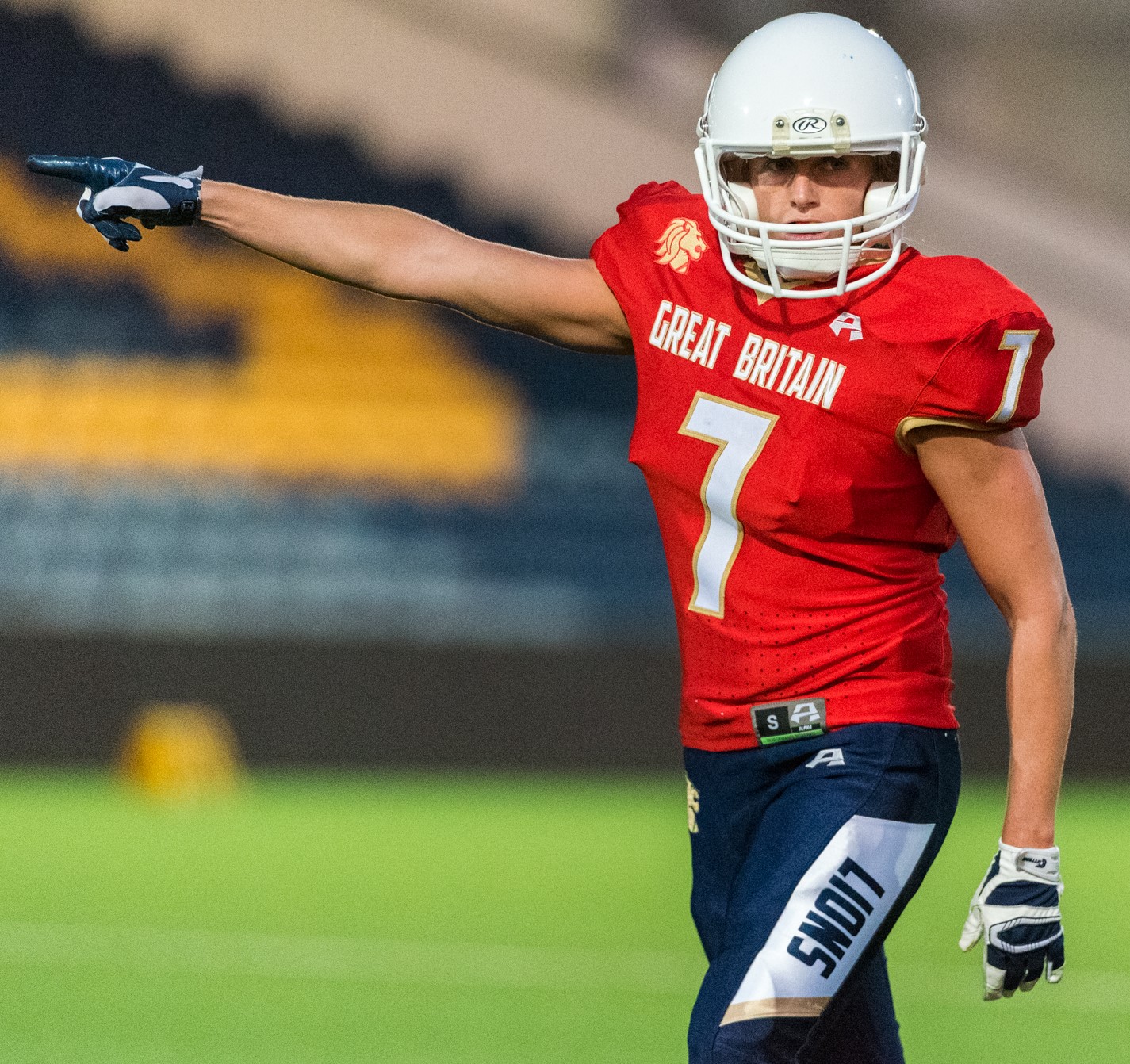 The extremely talented Sydney Green is tipped to start at quarterback for GB but knows it’s not a given.

“There were lots of great QBs trialling this year, so it was tough leading up to selection. With only a few weeks left until the tournament my main emotion right now is pure excitement. The competition squad consists of a fantastic mixture of vets bringing their invaluable experience to the team and players receiving their first caps that are ready to make a huge statement. Unlike Granada in WEC2015, Great Britain aren't underdogs anymore, but with 45 incredible athletes named I have no doubt we can live up to the expectations. There were a lot of big characters who retired from international caps after the World Championships - personally I wouldn't be the player I've become without their guidance and support along the journey. So, we owe it to those players to continue excelling our status as a national programme, and that means aiming for Gold in August”. 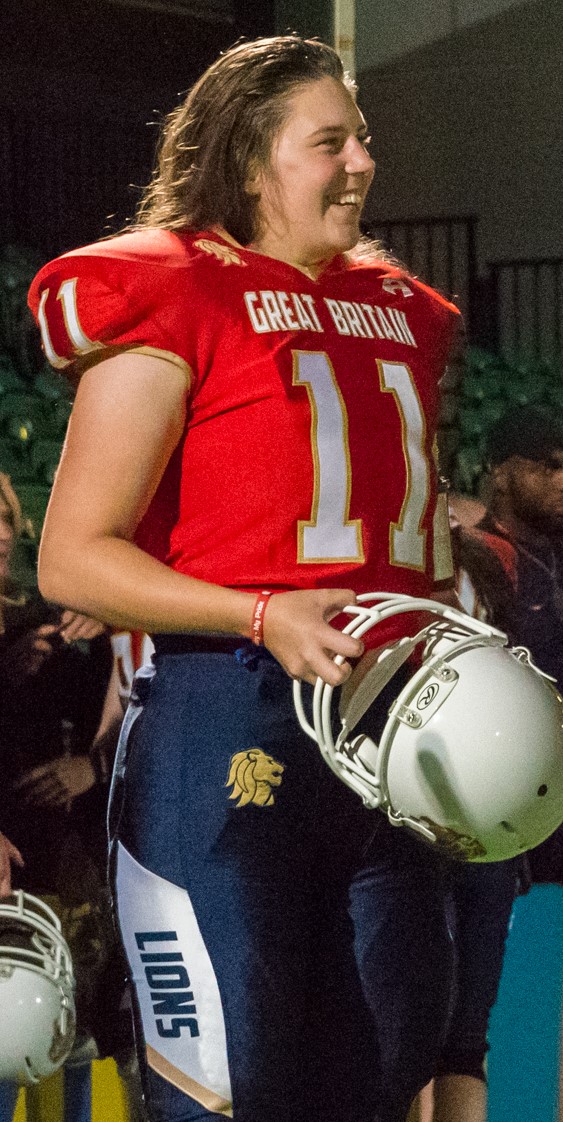 Running back Ruth Matta has been setting the gridiron alight over in Massachusetts this summer with the Boston Renegades, winning the National Championship and capturing the game MVP in the process, off the back of scoring three touchdowns. The good news for GB is she’ll back for the Euro’s.

“The last European Championships feel like a lifetime ago and a lot has happened since so I’m excited to see how the teams compare now. The last time Finland beat us in the final but then we evened the score at the World Championships 2 years later so I’m sure they’ll be gunning for us. I’m pretty confident they won’t be the only ones as Sweden have continued to develop their game and will be another tough test. A game I’m really excited about is our Austria match up. We’ve never faced them before, and I always enjoy playing different teams. Coupled with the tournament being held on home soil with all our supporters, I’m excited to get going”. 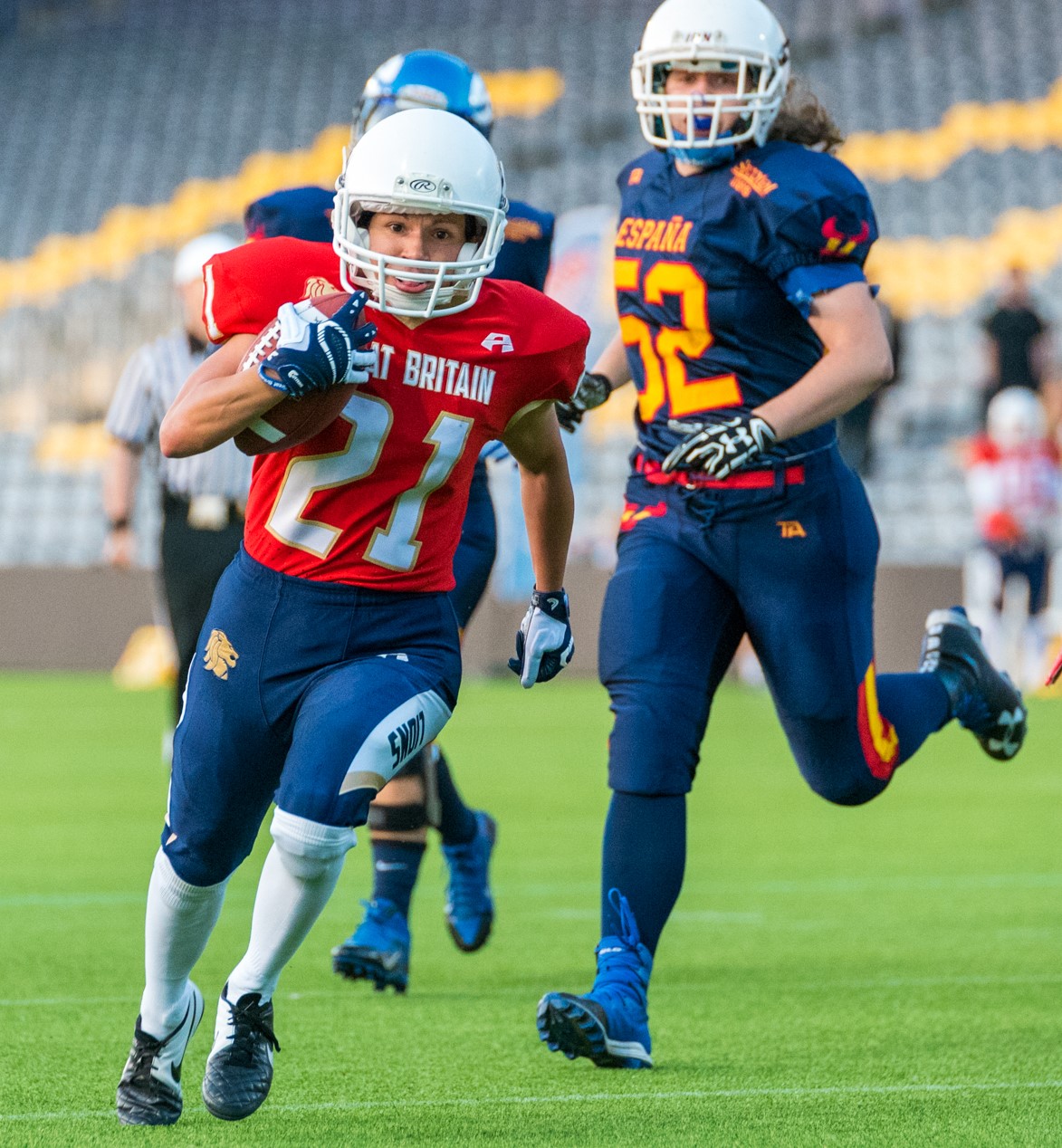 One of the unsung heroes of the GB team is defensive line stand-out Aimee Cottingham, who’s goal line tackles in the dying seconds against Finland at the 2017 World Championships helped secure that win.

“It’s great to have such a prestigious tournament held on British soil and this demonstrates how far women’s American Football has come in such a short time. There is no denying It’s going to be a very tough competition, we are no longer the underdogs and as such there is perhaps more pressure on us compared to the Euros in 2015. However, I feel we are ready to meet that challenge head on with pride and determination. Let the games begin!”

Finland are expected to be the toughest challenge for GB, and Austria are a somewhat unknown package. Coming in a little bit under the radar however, are the Swedes, they narrowly lost to Finland in their last outing and shouldn’t be underestimated. Their head coach is Christian Forsman, a football veteran with both playing and coaching experience, I asked him for his thoughts.

“I have been working in the head coach position for about 2 years and before that coached the RBs/FBs as a position coach. During these last 2 years we have worked hard both on and off the field to become faster and stronger players but also smarter as individuals and as a team.

We have had a bit of a generation shift these last few years and many of our loyal veterans hung up their pads and got replaced by a hungry group of players. As a team we have a few players that played in the last European Championship. We played a friendly game against Finland in October last year, it was a close game where we came up short 21-20, but given that many played their first national team game with new staff and playbooks, I’m proud of our performance as a team and believe that we have something really good to build on going in to the tournament.

Even though we have a lot of championship rookies in the team both as players and coaches, we aim high and I believe we have the talent and individual skills we need to win games, what it comes down to is for us coaches to put our players in a position where they can succeed.”

Personally, I think the key for GB will be strong performances in the trenches. The O line will be anchored by the Birmingham quartet of Gwynne, Dye, Martin and Hughes, whilst D line marauders Cottingham (Birmingham Lions), Lewinska (Oxford Saints), Moody (Edinburgh Wolves) and Npuna (London Warriors) will have to be game planned for by the other teams. Look out for Oli Davies to break some big kick returns, and for Schecter and Law to be pests in the opposition backfield. I won’t be surprised if ball-hawking DB Nancy Stone (Birmingham Lions) gets herself a pick or two, and I’m looking forward to Sydney Green airing it out to Jessica Anderson (Hertfordshire Tornadoes) and her other receivers. The biggest offensive weapon of course will be the dynamic Ruth Matta.

All the GB games will be 7pm kick-offs giving people the chance to get down to cheer them on after work. Let’s make the “roar” from the stands match the GB Lions roar on the field!