At the start of the 2018 season, if you had asked any member of the British Football community, “Who will win the Britbowl this year” chances are, you would have got one of three potential answers. The Phoenix, Warriors or Blitz. You wouldn’t need to be a perceptive genius to figure out that they are currently the three pre-eminent programmes in the adult premier strata. As the season reached its climax at the John Charles stadium in Leeds, we would find the Kings of both the North and South, the Phoenix and the Warriors, primed and ready to go. Both had been undefeated in the regular season, and with no disrespect to the other members of their divisions, it had become something of a procession for them on their journeys to the final. Other than their encounters with the Blitz, neither side had been challenged to any degree. An expectant crowd had assembled in anticipation of some top balling and gridiron thrills, and they weren’t disappointed! Let’s see how the game unfolded.

Tamworth won the toss and elected to receive, giving Pat Daley and the Phoenix offence the first opportunity to show what they could do. Unfortunately for them, it wasn’t much, as they were forced to punt. The snap was bobbled and recovered, but the Warriors took over on the forty-yard line. Quarterback Nick Jacquet aired it out to Benjamin down the side-line, giving London a first down at the Tamworth seventeen. At this point we got our first sight of what was to be a pattern throughout the game, running back Raymond Sobowale powered through the line and charged into the endzone for the score. Ian Jacquet tacked on the kick, and the Warriors had the lead 7-0. The Phoenix had the dangerous Marc Bonazebi returning kicks, and he ripped off a sizeable return. A run from Hope and a pass from Daley to Hossack had Tamworth driving downfield, but they stalled and turned the ball over on downs. A targeting penalty and player ejection didn’t help the Phoenix as the Warriors looked to increase their lead. Jacquet found Phil Newport down the centre of the field and he raced fifty yards for a touchdown! The conversion was good, and it looked like it might get ugly for Tamworth at 14-0, but the kick off was fielded by the electric Bonazebi who dodged the would-be tacklers and ran fully ninety-six yards for Tamworth’s first score of the day! He kicked the conversion himself, at 14-7, it was game on. 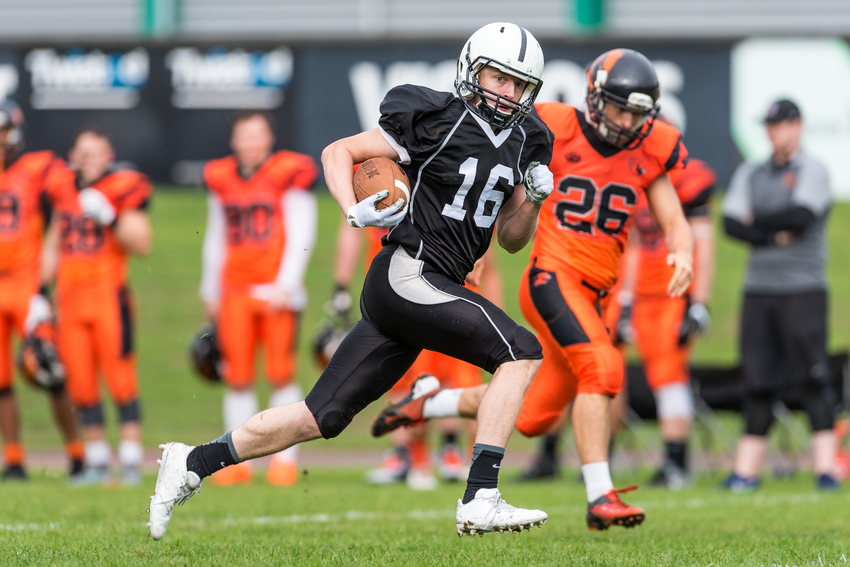 Newport on his way to the endzone

With the momentum swinging their way, the Phoenix defence put some pressure on the London offence, forcing them into a punting situation. The snap went over the punters head, but he recovered it and got the kick off, only for it to be blocked. Tamworth would take over on the Warriors twenty, from where Daley would break a run and then target Hossack in the endzone for the score. Bonazebi split the uprights and the contest was now all square at 14. With 1.38 left in the quarter, London looked to hit back, with Dwayne Watson breaking a big run, but Tamworth linebacker Dan Shodipo followed up with a big sack of Jacquet to end an electric first quarter. 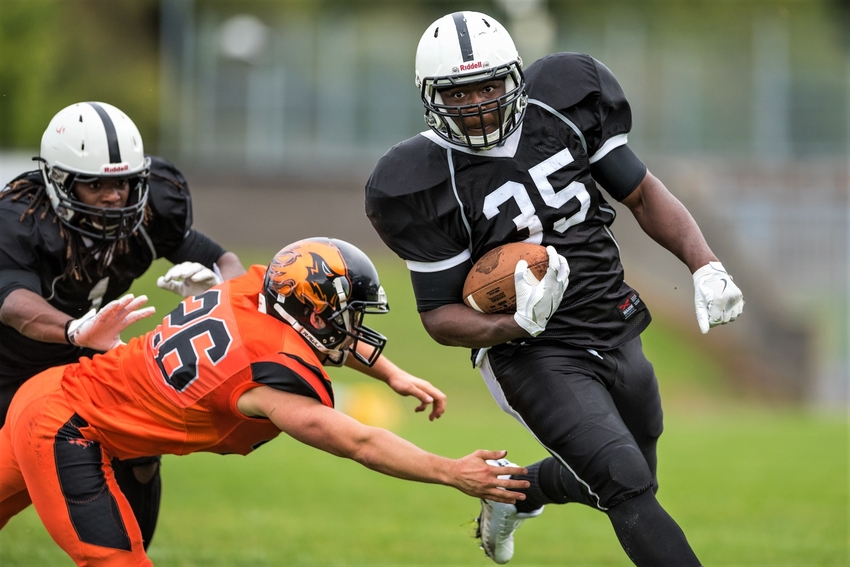 The Warriors had to punt, but the kick was fumbled by Jack Verling, and recovered by London at their own forty-five-yard line. Two huge runs by Sobowale had the Warriors knocking at the door on the three-yard line, leaving Watson to take over the rushing duties, and he strode in for the score. The attempted conversion failed, edging London back in front 20-14. Tamworth started the next drive with a big gain on a screen pass to Deji Ali, but it was called back, and the drive stalled. Both teams exchanged punts. The Phoenix introduced Elliott Walters at running back and he showed good burst, setting up Daley for a run of his own, that was called back forcing the punt. Two short gains for London were the pre-cursors for another monster run by Sobowale, scattering would be tacklers as he raced to the endzone for a score. This time the kick was good, and the Warriors had re-established their two-score lead, 27-14. The first half scoring wasn’t over yet though, as a good return from Huxtable, a fifteen-yard penalty, a run from Walters, and a key block from Pemberton allowed Daley to dart in for a touchdown, Bonazebi added the extra point, 27-21 Warriors. With 1.43 left in the half, dangerous kick returner Josh Amis set London up on their own forty-six. Watson trucked fifty yards and looked like he was going to score, before Will Hobbs chased him down at the Phoenix six-yard line. This time Sobowale would put the icing on the cake, barrelling in to score. Jacquet was good with the kick, making the half-time score, London 34 - Tamworth 21. 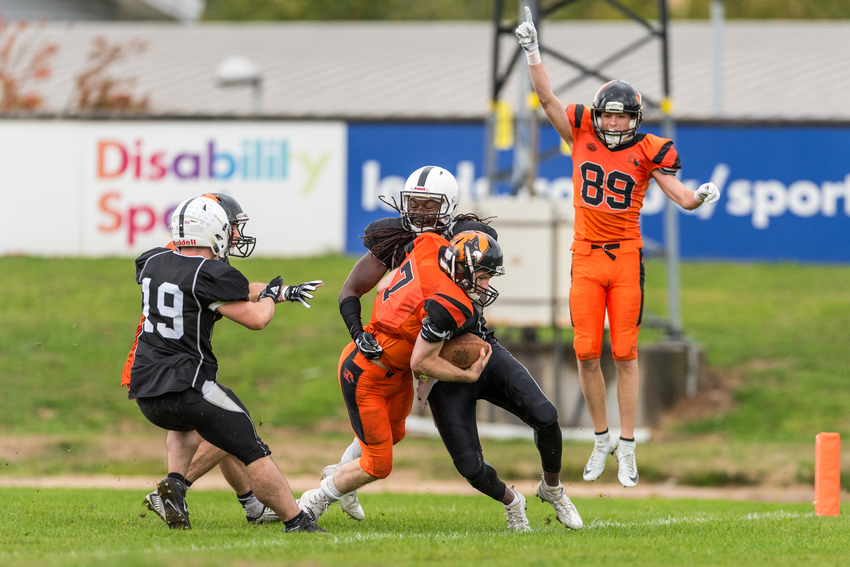 Daley worked his way into the endzone

The Warriors received the kick to start the second half and were mixing it up on offence as they drove downfield. A completion from Jacquet to Molloy followed by a reverse featuring Newport and another big completion to Benjamin kept the chains moving. Jacquet then went to Newport again, who sprinted forty yards to paydirt. Ian Jacquet’s kick nudged London’s lead to 41-21. The momentum seemed to be firmly with the Warriors, but Tamworth were still fighting despite Daley being intercepted. Watson coughed up the ball for Ben Davies to recover after a big hit by Wayne Drew. Daley dropped back and found Urbanski deep in London territory where he snagged the pass and went in for the touchdown! The score was converted, making it 41-28 at the end of quarter three.

The big plays and scoring had been relentless as the contest went into its final stages. The Warriors drove deep into Phoenix territory but stalled, and set up for a field goal attempt from the ten-yard line, but they faked it and went for the pass, unfortunately for them it fell incomplete and the Phoenix took over. Tamworth couldn’t move the ball and had to punt, giving the ball back to London. Putting the ball in the hands of Sobowale was a smart move, as he ploughed through the Phoenix for another massive gain of almost sixty yards. Watson only had five yards to gain to reach the endzone, and he did it over two plays, smashing through behind the Warriors impressive line. With the kick sailing through, it was now 48-28. Tamworth didn’t have much time left, so Daley rattled off a succession of quick passes with Walters, Hussey and Hossack making the catches. The Warriors defence stiffened and forced the punt, giving them the ball back, but they couldn’t move the chains, and had to attempt a punt themselves. Showing great speed off the edge, linebacker Shodipo made the block, putting the ball back in Daley’s hands at the London twenty-yard line. Ali bulled his way for a good run, and Walters caught a short pass as the two-minute warning was called. Hossack pulled in another Daley pass at the one, from where Ali crashed in to pull back six for the Phoenix. The conversion failed, making the score 48-34 Warriors. Tamworth tried the on-side kick, but it was recovered by Amis. Watson was handed the ball to eat up the clock, and broke a twenty-yard run, before London adopted the victory formation for Jacquet to take the knee and seal the victory. 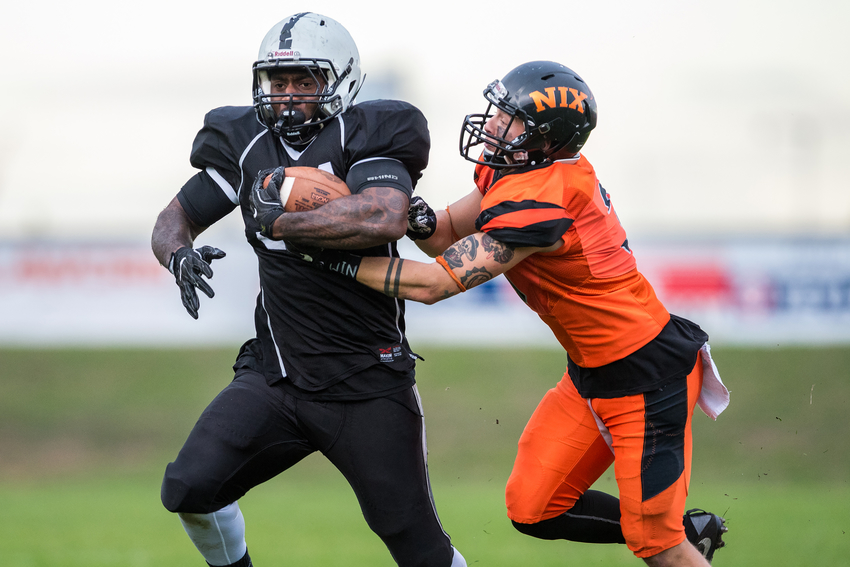 Watson was a major force for the Warriors

I spoke to Warriors linebacker coach Chris Lee to get his thoughts. “The game was really full on. We knew we were going to be playing a team that would be well coached and well prepared. The Warriors had a game plan prepared the week before the game and felt it important to stick to it. Whilst the Phoenix put us under pressure at times, I feel we had prepared our players in such a way as to understand the full game strategy rather than be reactive to the score; I’m convinced this added preparation is what helped us win. Our players remained focused when the Phoenix came back on us in the first quarter because they understood that we had prepared for the whole game. The Warriors playing in the backfield are an excellent and well drilled group; we wouldn’t be providing the best opportunity for our players to succeed if we were to ignore this fact. However, we are always aware that our opponent will know this and took advantage of Nick Jaquet’s ability to throw the ball, and the strength of our WR corps in the passing game. It was important to us to throw the ball and keep the Defence at Tamworth honest and were confident in our OLs ability to see and play their stunts and games well. Tamworth have some talented players, however we felt the strength of our team is in the execution of our game. We just stuck to our game as we have done all season long. We did see this year as a rebuild season, I think it’s important to highlight that 32 of our players and staff this season had not been in a National Championship game before. We are a very young team and we look forward to getting back to it and preparing for the 2019 season with a little more experience across the board.”

Phoenix president James Hossack was upbeat in defeat. “Obviously very disappointed to lose in the final, but proud of what we have achieved on and off the field this year. The programme has made massive improvements as a whole this year and returning to the Britbowl consolidates our position as one of the best in the UK. We’ll be back in 2019 to continue the R1SE”. The crowd and those watching the live stream had witnessed an absolute classic, with both teams finding multiple ways to keep the stats team busy. Ultimately the Warriors powerful ground game had seen them through, with Sobowale racking up 192 yards, he was the deserved winner of the MVP trophy, but fellow back Dwayne Watson had also been a major contributor with 139 yards of his own.

Britbowl XXXII had provided great entertainment and was an excellent advert for British Football. I for one, wouldn’t be surprised to see these two programmes do it all again next year.